there is much happening at the blue house this fall!

first, i will mention that i will be teaching two basic sewing classes this fall. thursday, october 14, from 6-8pm, as well as sunday, november 7, from 1-3pm. the class is for ages 14+ and is an introduction to sewing. if you have a machine you are afraid to use, think you'll break it, don't know what to do when it jams, are wondering how to wind a bobbin & when to backstitch, then this workshop is for you. the goal is to get you familiar (or more familiar) with the machine and to boost your confidence in using it. if you have a working sewing machine of your own you'd like help with, please bring it! (we will not be fixing machines.) there is table space to set up. there will be fabrics and notions to work on a small project to take home as well. to register for this, and all other workshops, visit that page at BHAA.
in addition to hosting the sewing workshops, blue house also has metal jewelry design, knitting, crochet, and screen printing workshops going on.
also at blue house... you can... rent studio space, join our monthly craft meet up, or reserve a tailgate party (since it's across the Big House!) really! all at blue house.

december 17-18 is the winter mittenMADE craft fair at blue house! there is currently a call for artists, applications due oct. 2. mark your calendars!

see you around the house!

Posted by dang argyle at 9:17 PM No comments:

library love is overdue in the dang shop 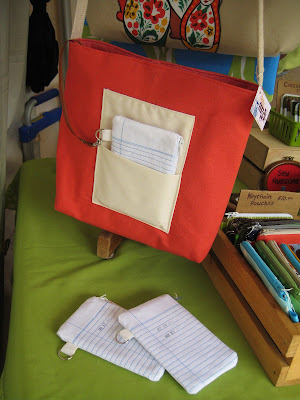 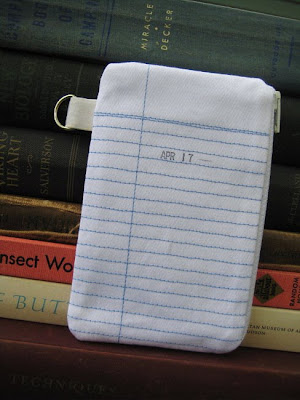 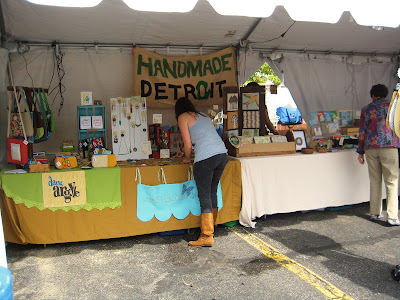 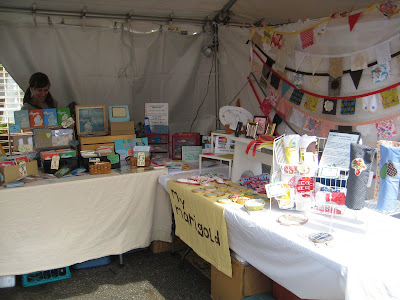 last weekend DIYSF was a total blast! it was a long weekend, and the place was super busy, but it was pure fun. i shared a booth with five lovely ladies: courtney fischer jewelry, all things grow, phantom limb, my marigold, & lish's vintage kitchen. we laughed, we ate, we drank, we sold stuff, we bought stuff, we people watched, we dog watched, we fought a little rain, enjoyed the sun, courtney tried on lish's glasses, shit was expensive even though it wasn't, and there was a crazy flying ant swarm like a scene out of the x-files.

argyle sighting: i spotted A LOT of argyle while i was sitting there! including sunglasses, baby legwarmers, t-shirts, and sweaters. 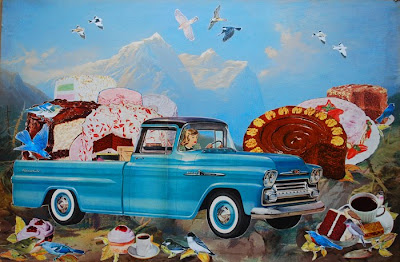 i bought the coolest paper collage print from detroit artist teresa petersen of the kitsch lab. the one i bought isn't shown on her website, but it is cool! the print features barn owls, cupcakes, a fridge, a forest, and a 1950s housewife. pretty much perfect for my kitchen. she will be one of the artists with studio space at the new pioneer building in detroit, a few blocks over from the russell. check out her studio tour images to catch a glimpse of it! they are having an opening on oct. 2 and you can buy her work there. since she doesn't do many shows i was glad to have run into her. her work will be included in an upcoming exhibition (titled What's So Funny?) at the gallery project right here in ann arbor, and i plan to check it out.
Posted by dang argyle at 9:36 PM No comments: 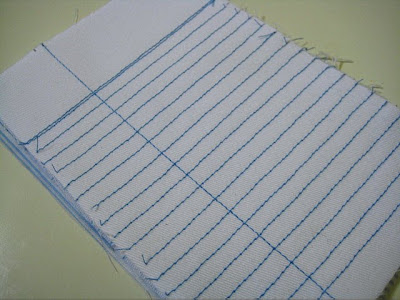 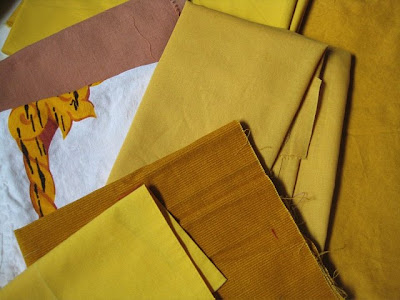 Email ThisBlogThis!Share to TwitterShare to FacebookShare to Pinterest
Labels: work in progress 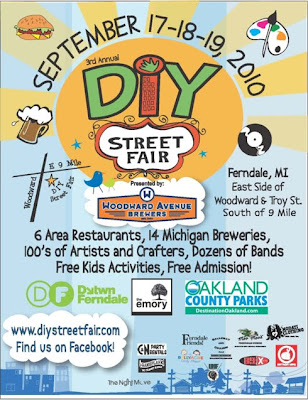 this friday - sunday is the DIY street fair in ferndale! michigan is representing big time at this local affair. the fair is a super fun time, and this year will be dang argyle's first time as a vendor. we'll be tucked in the handmade detroit tent (booth #76) with courtney fischer jewelry, all things grow, my marigold, my vintage kitschen, and phantom limb! we'll be easy to find, next to the beer garden. look for me on saturday & sunday all day!

as the poster states, there will be over 100 craft vendors, 40 live bands, many craft beers in the beer garden, restaurant row (with veggie options), kid stuff, etc.

see ya there!
Posted by dang argyle at 9:32 PM No comments:

mr. pickle came into existence a few weeks ago thanks to a stuffies workshop at blue house ann arbor. he was quite a lucky fella, as just a few days later he was on a plane to spend a week in colorado! he didn't get too wild, survived being handled by children, and he had a great time! 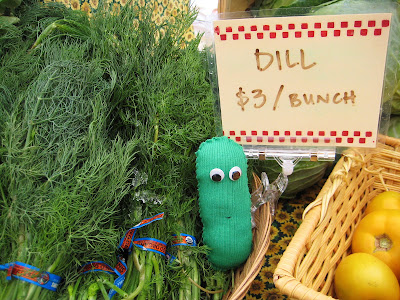 a visit to the boulder farmer's market, which totally rocked 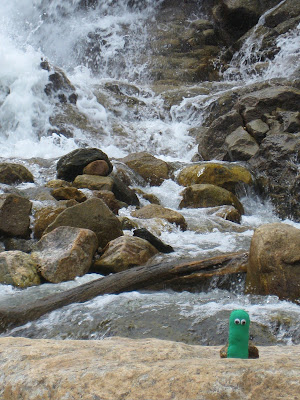 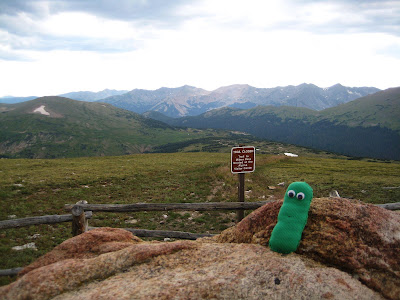 driving through the rocky mountains 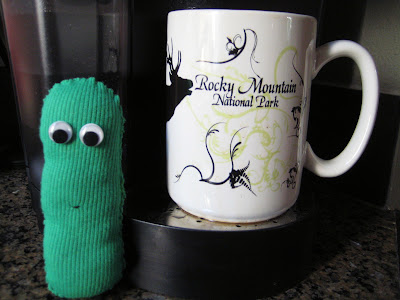 even mr. pickle likes to wake up to fresh roos roast in the morning! 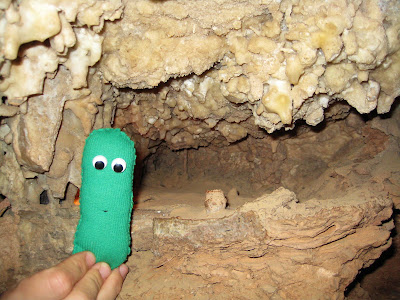 cave of the winds 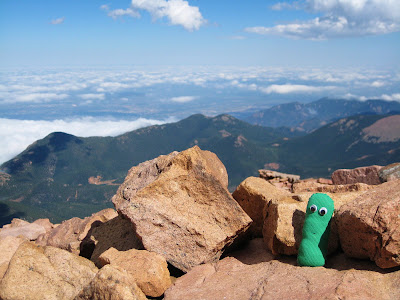 at the top of pike's peak! this was his favorite. 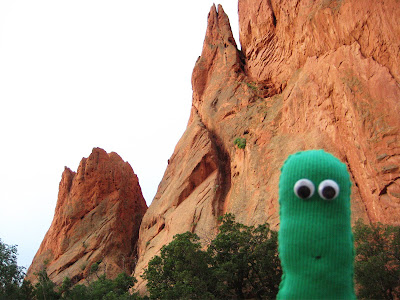 garden of the gods 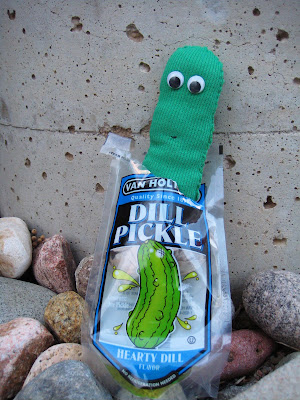 i enjoyed this pickle. but mr. pickle gave me a funny look as i ate it. 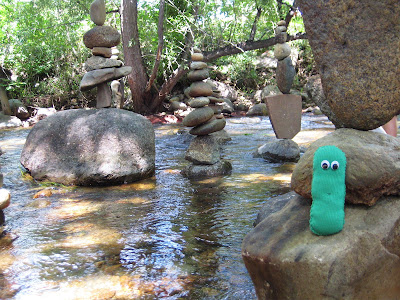 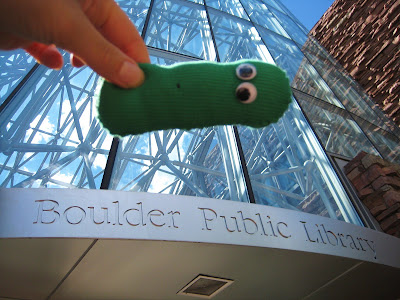 no trip is complete without a visit to the local library! 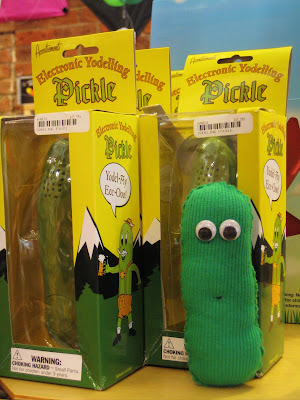 a yodelling relative! he found this less offensive than the pickle band-aids he saw at the same store. mr. pickle has since signed up for yodelling lessons in town. 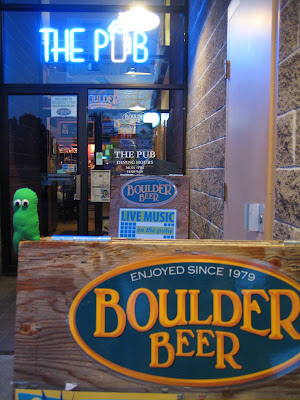 he enjoyed a kinda blue beer at boulder beer. 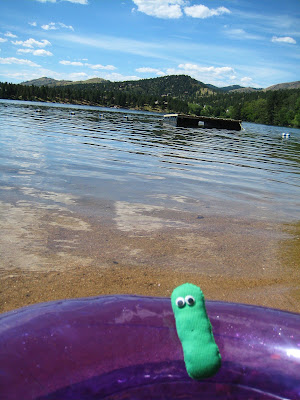 enjoying some sun time at a private beach outside boulder. 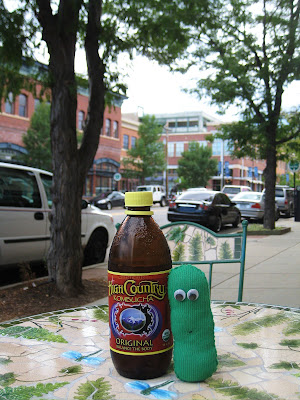 ah, a heavenly boulder-made kombucha on pearl st.
overall it was a fantastic time, and i was glad i brought him along for the ride. since we got back he's been bugging me about going on another adventure. i may be calling on your help soon to fulfill this travel bug he caught.
Posted by dang argyle at 4:28 PM 2 comments: