grilled cheezes to melt your brain

i've been super into finding creative and tasty ways to jazz up grilled cheeze to go with all the wintry soups i've been making. yes, i spelled it with a Z because i use vegan cheeses.

recently buzzfeed posted a "31 grilled cheeses that are better than a boyfriend" article and i was majorly inspired. 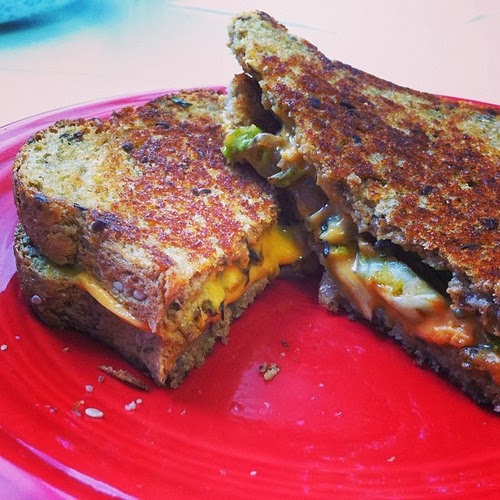 first up was brussells spouts, which i've been way into lately.

i sauteed some shallots with a little sugar to brown them up, then added the brussells sprouts and salted and sauteed until a rich brown. i then used multi-grain bread with earth balance and two slices of daiya cheddar, sandwiching the sprouts and shallots between the two slices of cheese. grilled like normal. and voila -- deliciousness. 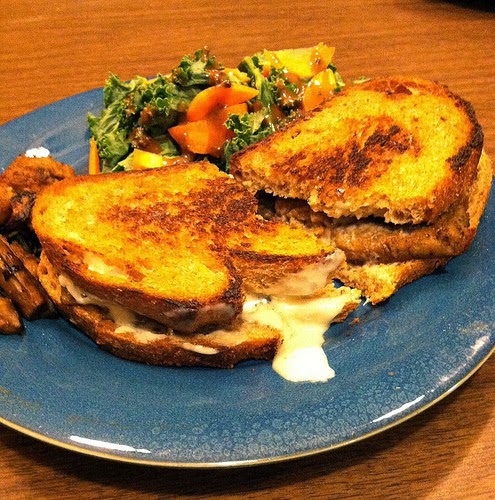 last night's adventure was a "we're super hungry now what's in the fridge that's fast." which lead to grabbing mushrooms and field roast smoked apple sage veggie sausages. i sauteed up the mushrooms and sausage, which were sliced thin and lengthwise. then sandwiched it between two layers of daiya swiss cheese on wheat bread with earth balance. the swiss with these items was perfect. it was the kind of sandwich i wanted to spend the night with. i felt a tad less guilty eating it with a side of kale.

so far, that's what we've done, and i'm looking forward to making more grilled cheezes with other fun things. last night i was thinking apples! and on another i'd do pickled green tomatoes.

what are your favorite things to put on grilled cheese sandwiches?!
Posted by dang argyle at 1:17 PM 2 comments: 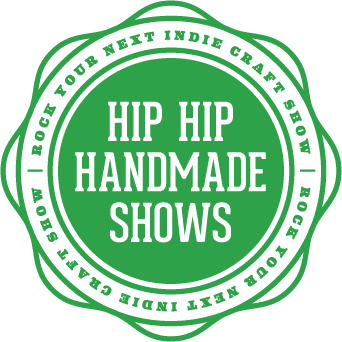 the wonderful stephanie of type shy has an amazing project she's been working on. hip hip handmade shows is a great online resource that "aims to educate and connect indie craft vendors." as one of these craft vendors, let me say: HOW GREAT IS THAT?! she is a former member of handmade detroit and co-founder of the amazing detroit urban craft fair, so you know her facts are legit.

the site features great info a variety of topics related to craft fairs, including: craft fair 101, getting in, preparation, displays, money & sales, biz tips, and productivity. this is super handy for craft fair business newbies as well as seasoned crafters looking to see how they can improve upon their already up and running business.

one of my favorite things on the site is the big list of indie craft show applications that she has compiled and keeps updated. if you're looking to see what shows are now accepting applications-- this is your spot!

take a peek and be ready to be inspired!
Posted by dang argyle at 9:06 AM No comments:

living in michigan means you get a pretty decent winter. this year things have gone a bit differently and we've had the most real winter that i can ever remember. the kind of winter where i wear my snow boots all day every day. we've had record breaking snowfalls, low temperatures and wind chills. it's been crazy and at this point in february i'm already sick of it! and i like the winter! i would just like to drive my rear wheel drive vehicle on icy roads without sliding all over the place. but when it's gone... i'll sure miss the boy's wood burning stove.

but on a lighter note; winter sure is pretty. snow covered trees are so majestic and wonderful i just can't help but stare and dream. i can also continue to dream about the southern beach i'll be sitting on at the end of april -- trip is booked! 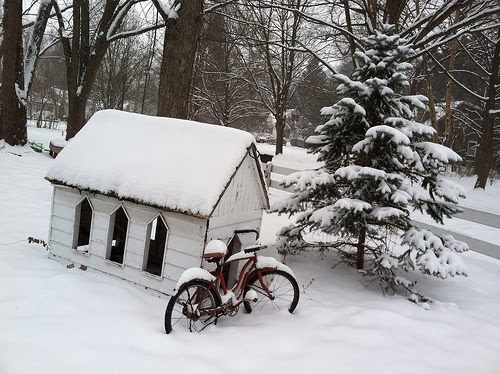 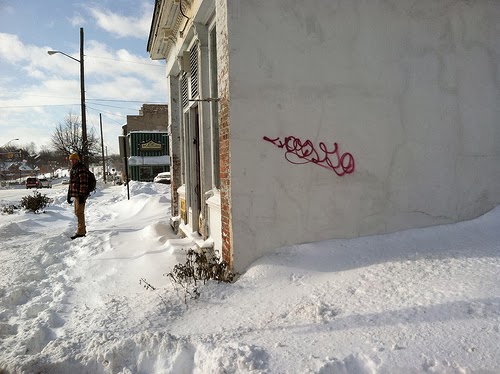 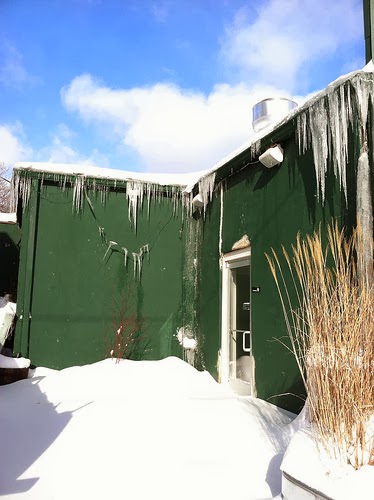 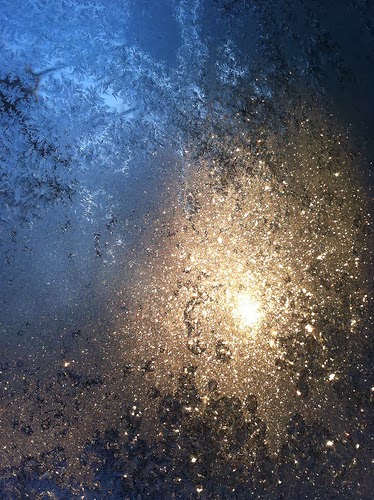 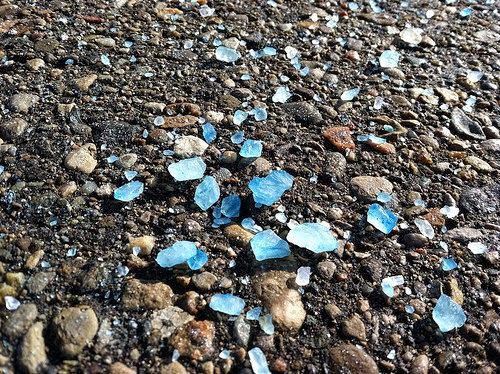 Posted by dang argyle at 9:29 AM No comments: 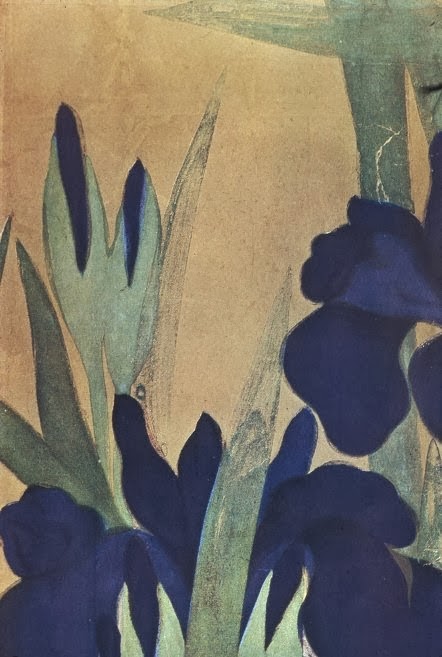 dang argyle has always been manz and coco, coco and manz. i've been the voice of this blog for a while now, and well, i'm not so great on keeping up with it! but for those of you who keep up with and seek out fabulous blogs...

i have some good news! cortney started a new blog:  iris + anselm. it's a charming blog featuring artists, designers, makers, travel, food, books, and more. it is updated regularly with lovely things to look at and read about. if you're looking for some inspiration and loveliness to help lift you out of the february funk, check it out!
Posted by dang argyle at 11:00 AM No comments: 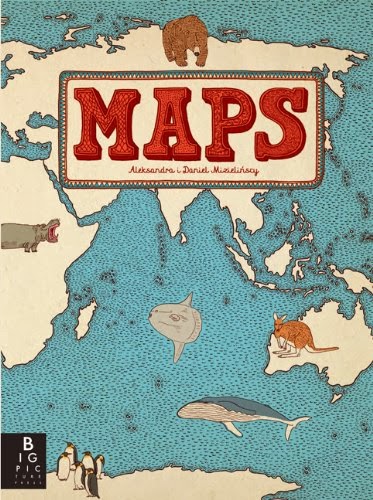 i previewed this book and my local library and fell in love with it. maps, by aleksandra mizielinska and daniel mizielinski, is one beautiful children's book. this is not your average geography book or atlas. each set of pages features beautifully illustrated, large format maps of continents and countries. the maps include pictorial representations of culture and history in addition to specific places.

here is iceland and the united kingdom, to give you an idea of the magic of this book: 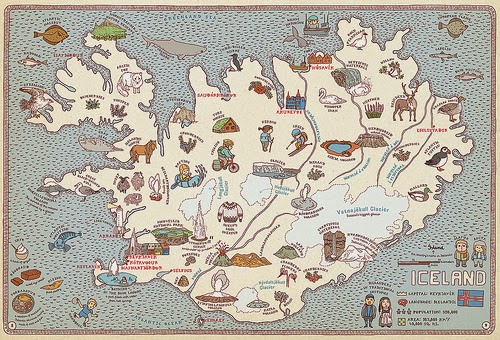 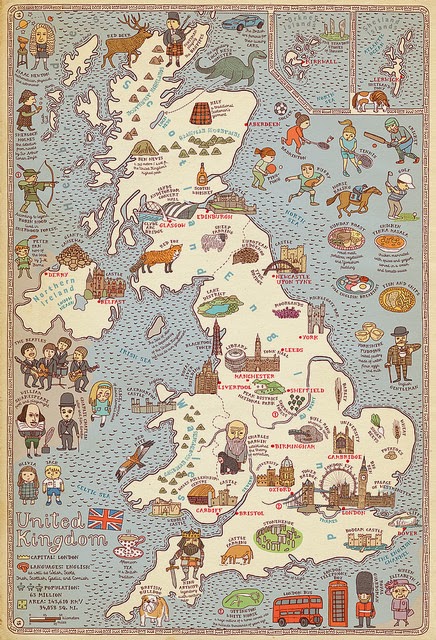 Posted by dang argyle at 1:41 PM No comments: