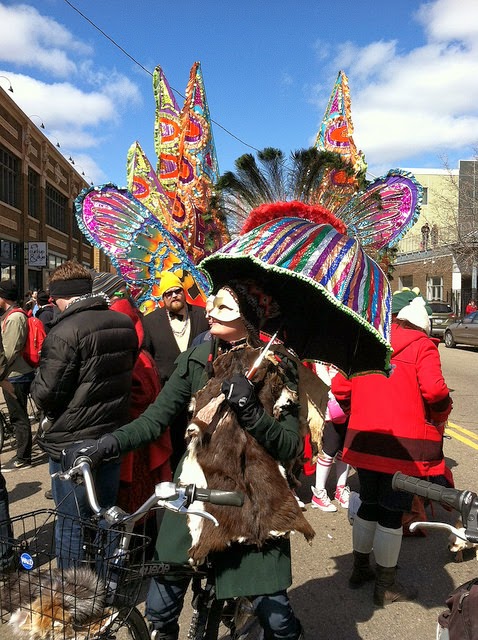 this past sunday in detroit was the marche du nain rouge! you don't go to watch the parade, you go to BE the parade. costumed folks gathered at cass and canfield with a hope for better things for detroit's future, celebrating "happiness, success and freedom from the antagonism of the nain in the new year." they march to banish the nain from detroit so that goodness may shine. of course the nain shows up and is up to his old tricks!

it's a super fun event and i was glad to go this year. it was chilly but the sun was out and much merriment surrounded the area as thousands marched through detroit's streets. i LOVE these kinds of events-- artistic, crazy, imaginative and full of participation from citizens. this has me SUPER excited the ann arbor's upcoming foolmoon and festifools events, for which i purchased 2 yards of silver pleather to make a skirt for. we'll see... 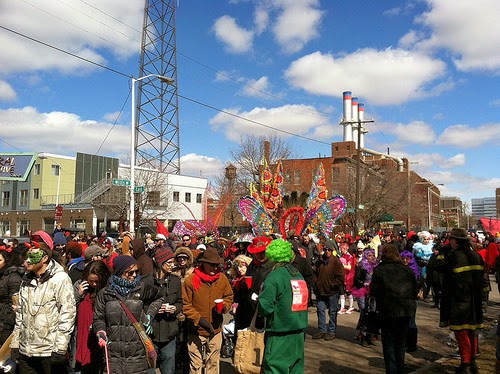 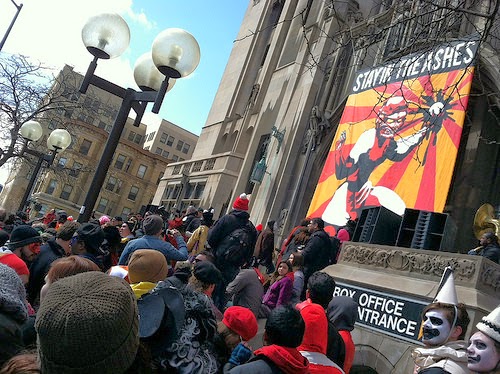 the marche concluded on the footsteps of the beautiful masonic temple, and was followed by an afterparty in one of grand ballrooms filled with red lights, a DJ, dancing, and drinks. it was a great event that made an amazing weekend even more special. 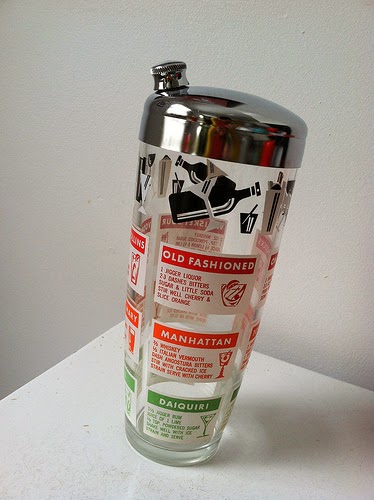 lately i've been plotting about making nice cocktails and sipping them by the fire in front of the wood stove. after this long winter i'm ready to move the fire outside and sit on the deck with a summer chiller. i've been slowly trying to beef up the home bar at the boy's house with delicious ingredients and pretty tools. i have been collecting simple cocktail recipes with basic ingredients to start with. i recently came across a list of 25 Brilliant and Literary-Inspired Mixed Drinks which sound amazing! and well, it's books! i've also been enjoying checking out the cocktail recipes over at putney farm. 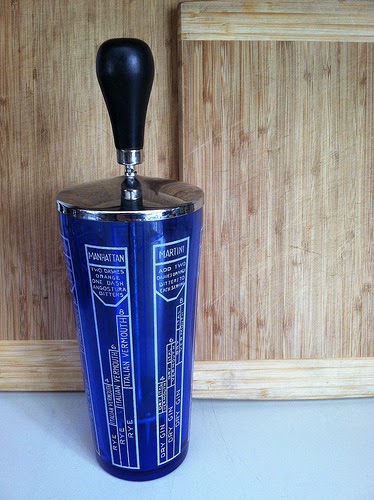 we recently thrifted these two great mid-century drink shakers to get things going. how cute are they? i love them! what are some of your favorite cocktails!? what's your favorite "must have" item for the home bar?
Posted by dang argyle at 1:13 PM 2 comments: 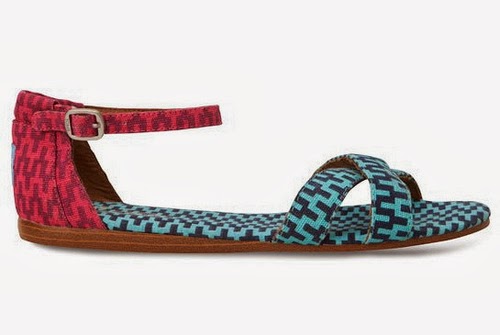 toms has some smashing new shoes featuring jonathan adler designs. i'm drooling.
spring is just around the corner and these will be necessary! my current pairs of toms are so comfy and are perfect for work and play.

Posted by dang argyle at 9:09 AM No comments: 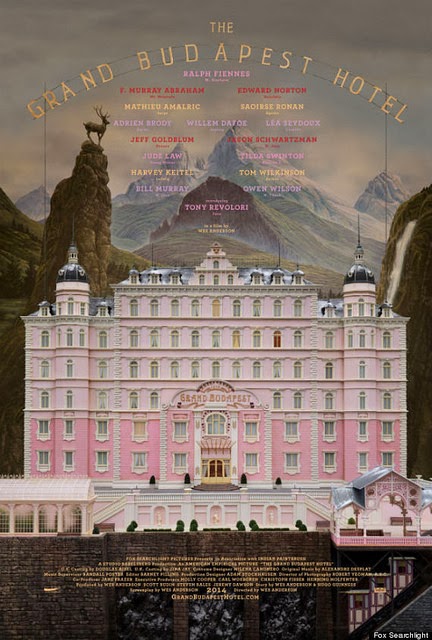 this month marks the release of the latest wes anderson film the grand budapest hotel. being a wes anderson film it will be a visual treat that i'm so looking forward to! a fabulous article came across my internet path today that features an interview with the film's lead graphic designer annie atkins. she discusses all the thought and design work that went into creating all the print material props that are in the film. the materials had to inhabit a make-believe country so they are all from scratch. she worked closely with anderson to achieve the authenticity and look they were going for. i know when i watch the film i'll be keeping an eye out for these amazing pieces of art! 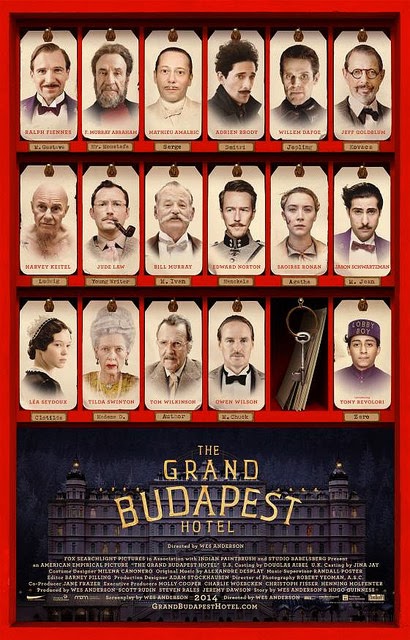 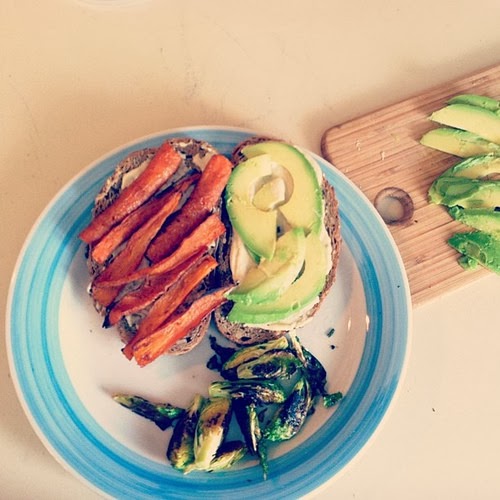 mid-saturday i found a recipe for carrot bacon, which was the perfect thing to make for breakfast on an easy sunday morning. i love easy sunday mornings with the boy, lots of coffee and a nice late breakfast. i put the carrots on toast with avocado and hummus, with a side of brussels sprouts. it was delicious. the carrots didn't hold up the smoky flavor of the marinade as much as i'd have liked it too, but it still make for a great taste. they were delicious also just dipped in the hummus. i used this recipe, but our carrots were cut thicker and we had to bake them a lot longer. next time i make them i will use my mandolin slicer for crispier carrots! 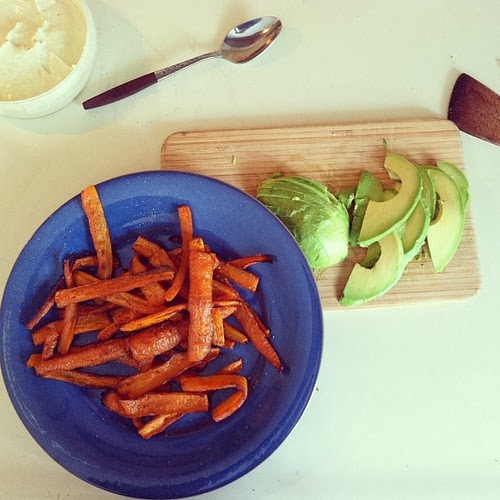 Posted by dang argyle at 9:35 AM No comments: